This is my second time attending CVPR. I was able to enjoy it more than the first time, being more relaxed and clear about what I want to see and whom I want to talk to. This time the conference is held at Long Beach, a place I visited back in 2016 and unfortunately lost my Sony camera. Regardless of the unpleasant memory, it’s a nice walk along the beach, passing by the colorful stores. I took some pictures walking by the shore when I felt too exhausted to stay focused on the technical stuff. It’s overall a quiet city that separates from the busy LA vibe. 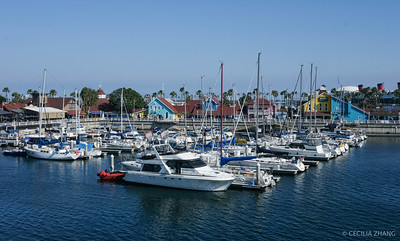 This time all my labmates from Berkeley went together and we stayed in a huge Airbnb a mile away from the convention center. Every morning we walked to the convention center and thanks to that I completed my exercise ring everyday. I’ve been told all the hotels / Airbnb are sold out really fast, and some of my friends had to live close by LAX, a more than half an hour drive from the convention center. I don’t know the exact number of people who actually attended this conference, but probably more than 8K+. CVPR is growing at an unpredictable rate. Slightly related to that, here are some interesting stats of CVPR 2019 papers.

I had mixed feelings about this conference trip. This time the committee arranged workshops to be held at the beginning two days, unlike last time when workshops are at the end. Overall it’s not well organized, I even couldn’t squeeze into the workshop I wanted to attend, while some other rooms are huge but empty. It is understandably hard to predict the number of attendees for each workshop reliably, but there could be some heuristics such as giving larger rooms to those with more well-known professors. Things got better for the latter half of the conference: I got to see interesting posters and had some insightful conversations with those authors. This time all the oral papers only have 5 minute presentations, which seems too short to be helpful. Company parties are always the fun part, where I was able to say hi to old friends.

Some of the highlights. (in draft mode)

▶ The best paper goes to a computational imaging paper, which is a big surprise, at least to me. I know little about non-line-of-sight imaging, but it’s great that the conference recognizes non-learning and non-deep papers. I hope this would encourage more researchers to work on these fundamental and scientific problems.
▶ GAN-related works seem less promoted this time, I think there are many issues related to privacy and law that await to be figured out.
▶ It’s interesting to see that many self-driving car companies brought their cars to the conference, although the time of autonomous driving seemed delayed to further than 10 years (it was said to be 5 years in 2018).
▶ Magic Leap had a very long queue for people to try on their VR gears (Yes finally!). They had a post about their Mica, but I’m told that she wasn’t yet able to interact with the user.

I also list some papers that I found especially interesting (may be biased towards my interests). (in draft mode)

▷ Using Unknown Occluders to Recover Hidden Scenes: estimate occluder and the object from video clips; this reminds me of the accidental pinhole paper from Bill and Antonio. Link
▷ "Double-DIP": Unsupervised Image Decomposition via Coupled Deep-Image-Priors: use image prior to decompose layer from a single image, using exclusion loss that we proposed in our CVPR 2018 paper for reflection removal. Link
▷ Towards Real Scene Super-Resolution With Raw Images: very similar idea to our zoom paper this year, but instead they use synthetic raw data and generated good results. Link
▷ Fast Spatially-Varying Indoor Lighting Estimation: estimate spatially-varying indoor lighting from a single RGB image. Link
▷ Learning the Depths of Moving People by Watching Frozen People: a monocular depth estimation from mannequin video challenge, very neat and cute idea. Link
▷ Shifting More Attention to Video Salient Object Detection: a new dataset that contains saliency change within a video clip, this could potentially be used in our SIGGRAPH paper to identify new focus targets. Link

More about some personal experiences, my poster presentation went well. I didn’t stop talking for a single minute during the 2 hour presentation. There are continuous flow in and out and I’m happy to see people interested in our idea and impressed by our results.

The NTIRE challenge has the similar idea using zoom data for image restoration and enhancement. One of the organizers reached out to me and asked if we would like to contribute our data to their benchmark dataset. I’m thankful for them to ask, and glad that people are making great efforts to solve real-world super-resolution problems.

☺ Scale AI has a very popular T-shirts with “Crazy Rich Bayesian” in the front.
☺ The CVPR official T-shirt has a huge NVIDIA at the back, making everyone seems affiliated with it.
☺ Rick says that he’s working on the second version of Computer Vision textbook and there will be deep learning sections in it!
☺ The ice cream served on the third day is still a highlight of this conference.
☺ Facebook happy hour is held inside the aquarium with dolphins and penguins show, and I missed both.
☺ Microsoft party is held on Queen Mary, where some ghost stories took place.
☺ We had two lab meals, one at an Italian place Coline booked, one at a Mexican place with a dish called flaming cheese. Both are fun and I had a great time with my RenNgades, it’s a pity that Ren didn’t come this time.
☺ After this CVPR, I look forward to the upcoming SIGGRAPH even more.
☺ Again, not a surprise anymore, two out of the three Diamond Sponsors are Chinese companies: SenseTime and Megvii, and this time more of my American friends started asking me what these companies do.
☺ XILINX had an artist in their booth for portrait drawing.